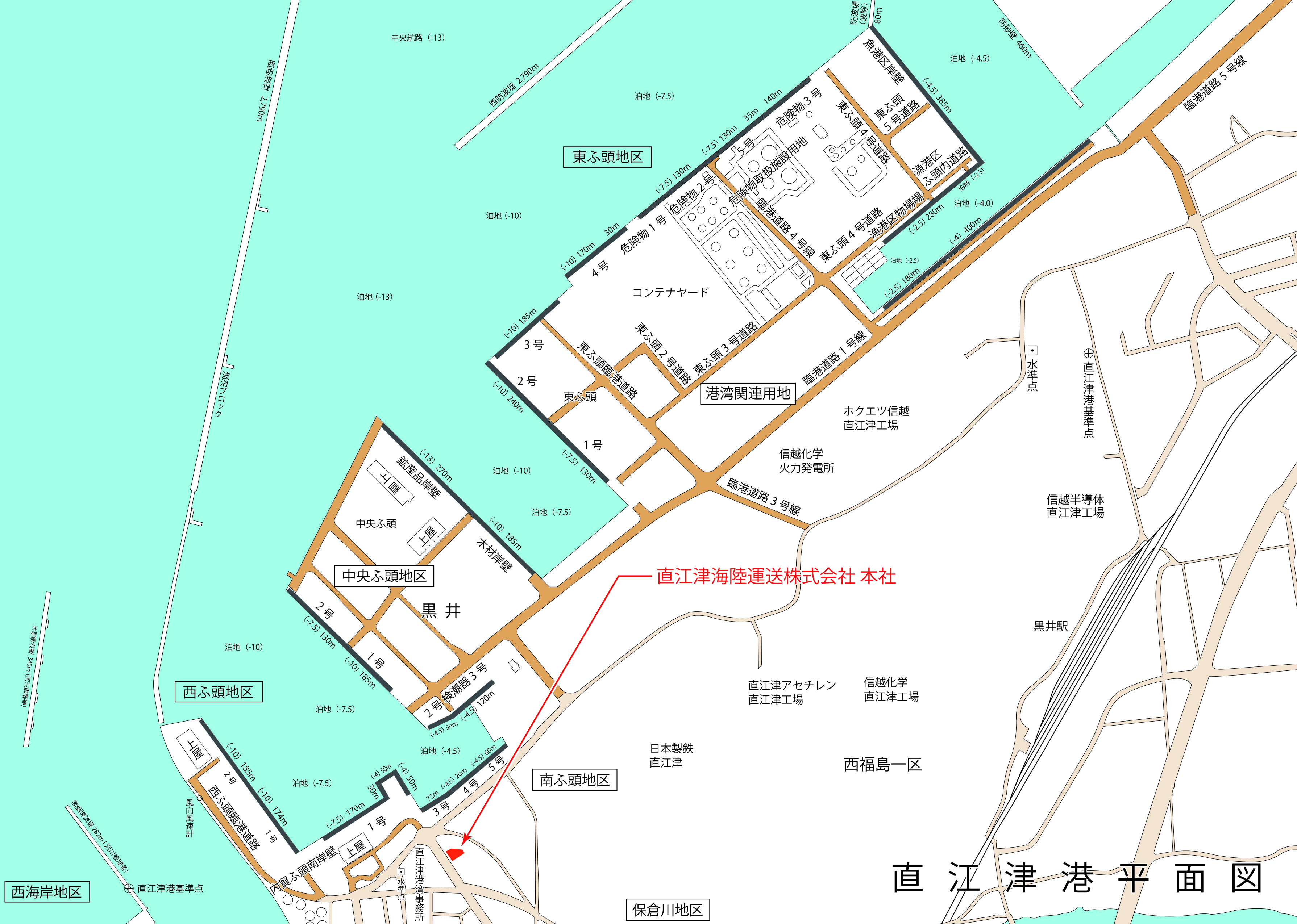 History of Naoetsu Port
Naoetsu Port faces the Sea of ​​Japan and has prospered as a key port of Echigo Kokufu since the Nara period. In particular, when Kenshin Uesugi, a military commander during the Warring States period, had a population of 60,000 and was heavily protected as a port in the second largest city after Kyoto, he specializes in rice, salt salmon, and Echigo Jofu. We traded with ports in the Keihan region, distant Kyushu, and Hokkaido.
Entering the Meiji era, it became a popular port of call for regular routes to Niigata and Otaru, and regular routes to the Sea of ​​Japan from Kobe to Otaru. In addition, the Shin-Etsu Line starting from Naoetsu opened in the direction of Nagano, making it the only route to reach central Japan. As a result, the distribution of goods to the Nagano area became active until the Taisho era, and factories advanced to the hinterland of Naoetsu Port.
It was designated as an important port based on the Port and Harbor Act in 1951, and the port force became extremely active due to the separation of the estuary in 1960. Since then, we have been making efforts to improve port facilities, such as the construction of the second 50,000-ton class quay on the Sea of ​​Japan side. The handling of containers, which started in 1995, has significantly increased the amount of containers handled by regular routes to South Korea and China with the start of operation of the gantry crane in 1999, and the number of containers handled reached a record high of 31,000 in 2014. It broke through the TEU.
Furthermore, the "Naoetsu Port Port Plan" was revised centering on the development of a large public wharf and the location of the LNG thermal power plant. In 2004, the land reclamation work for the thermal power plant was completed, making it one of the largest LNG thermal power plants in Japan. Construction was advanced. Commercial operation started at Unit 1-1 in July 2012 and at Unit 2-2, the final unit in May 2014.
In addition, construction of an LNG terminal was started in the area adjacent to the thermal power plant in 2009, and operation started in December 2013.
In November 2011, a base port on the Sea of ​​Japan side was selected along with the port of Niigata, and it is expected that it will further develop as an international trading port that handles not only domestic but also international logistics.
Overview and status of Naoetsu Port
Naoetsu Port is located in the central part of the coast of the Sea of ​​Japan, at latitude 37 degrees 10 minutes 46 seconds north and longitude 138 degrees 15 minutes 12 seconds east, and is located approximately halfway between Niigata Port and Fushiki Toyama Port. Adjacent to the mouth of Sekigawa, a first-class river whose water source is Sakai, Nagano Prefecture, overlooking the tourist destination Sado Island north of the Sea of ​​Japan, behind is the Myoko Plateau area, which is the Joshinetsu Kogen National Park, to Nagano Prefecture. I understand.
The terrain is located in Joetsu City, and the alluvial plain formed by the accumulation of sediment carried by the Sekigawa and Hokura rivers spreads behind it. On the coastline, hills called coastal dunes, which are solidified by thick deposits of sand blown away by the winter monsoon, extend from east to west.
The geology is mixed with mud and sand throughout the harbor area, and the inside of the harbor is sand, mud and gravel.
The weather is generally weak from spring to autumn, but the west to north monsoon blows and the wind waves are high because the pressure distribution of west high and east low continues from late autumn to winter. 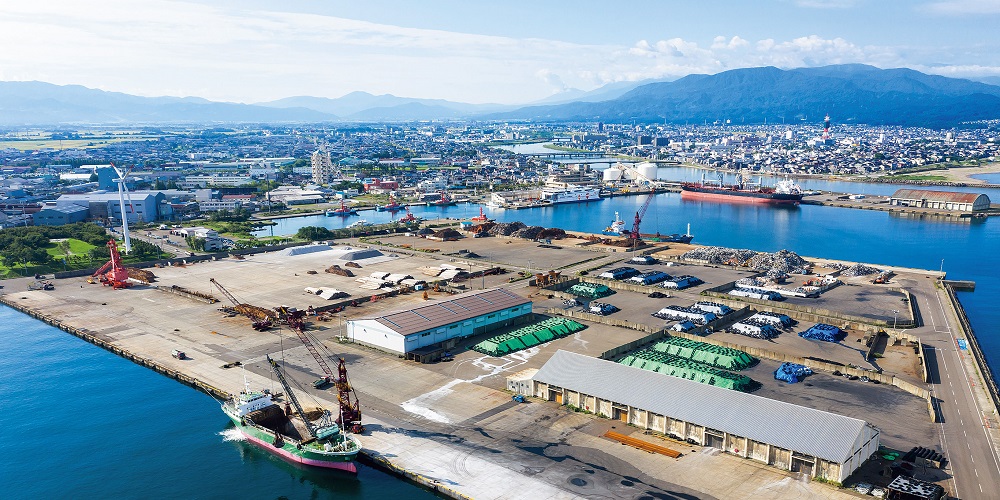 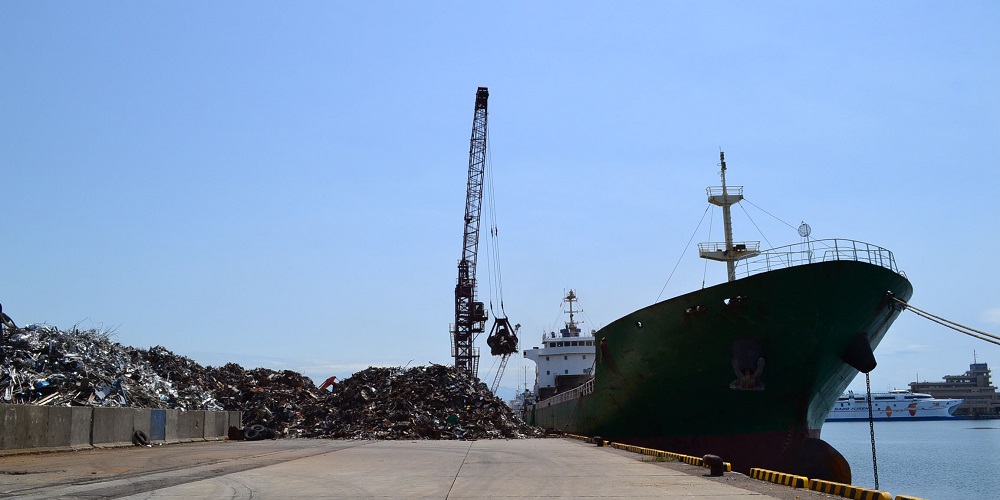 About Himekawa Port
The second base and the adaptable Himekawa Port.
～ As an cement only base port of the Sea of ​​Japan ～
～ As the main port of distribution base (recycling port) ～
“Himekawa Port”（Itoigawa-city）is located near the westernmost tip of Niigata with both Toyama and Nagano prefectural borders.
Since the port opened in 1973.as an excavated port right next to Himekawa river. the class A river as of 1973. This port has been developed remarkably for cement exporting of its original fuel. This port shows great function as a local port that received designation of important point-investment port. Which is equal in level to other major ports.
As the second base of naoetsu kairiku Unso Co.Ltd. and due to the cement company. and also being located near the Nagano/ Chu-shin area. Himekawa port meets the needs of the customers through its adaptability in domestic, Russian Chinese, and Korean foreign currency and cargo. 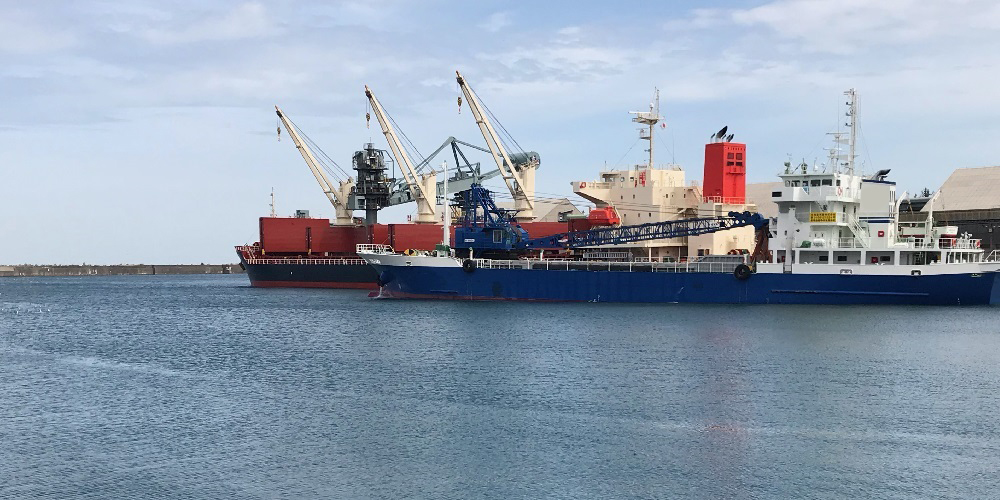